The Board of Directors is well aware of its roles, duties and responsibilities for directing the Company’s operation, monitoring the Management’s operation, performing duties with knowledge, competence, transparency, due care and accountability for the Company and its shareholders and being independent of the Management. Here are the key guidelines on the Board’s operations:

The Company has specified qualifications of the Board of Directors as follows:

Any person being appointed as Independent Director of the Company may be a person who has or has had a business relationship, or may be a professional advisor receiving amount exceeding those specified in item 5 or 6 in case the Board of Directors has duly considered that relationship will not affect the ability to perform duties and express independent opinions.

Directors shall hold the terms as stipulated in the Public Limited Companies Act B.E. 2535 and the Company’s Articles of Association, which reads “At each annual general meeting of shareholders, 1/3 of the directors, or if the number is not a multiple of 3, then the number nearest to 1/3, must retire from office. The directors who have been the longest in office shall retire first. The retiring directors may be re-elected.” The Nomination and Remuneration Committee will select and nominate qualified persons to be directors to the Board of Directors before seeking approval from the shareholders’ meeting.

The Board of Directors recognizes the importance of new director orientation and had adopted a policy and method on this matter as follows:

The Board of Directors encourages, supports and provides convenience for all parties concerned with the Company’s corporate governance processes such as directors, sub-committee members, management, Company Secretary, Investor Relations Department, Accounting Department, etc. to participate in training and seminar programs or activities arranged by Thai Institute of Directors (IOD), the SET, the SEC, Thai Listed Companies Association, Thai Investors Association or other independent organizations on a regular and continuous basis in a bid to enhance their knowledge and operational efficiency. The Board of Directors has assigned the Company Secretary to coordinate with the directors and management and inform them of details about the said training courses.

As of December 31, 2019, the Board of Directors and sub- committees attending courses organized by IOD and by other institutions, as tabulated below: 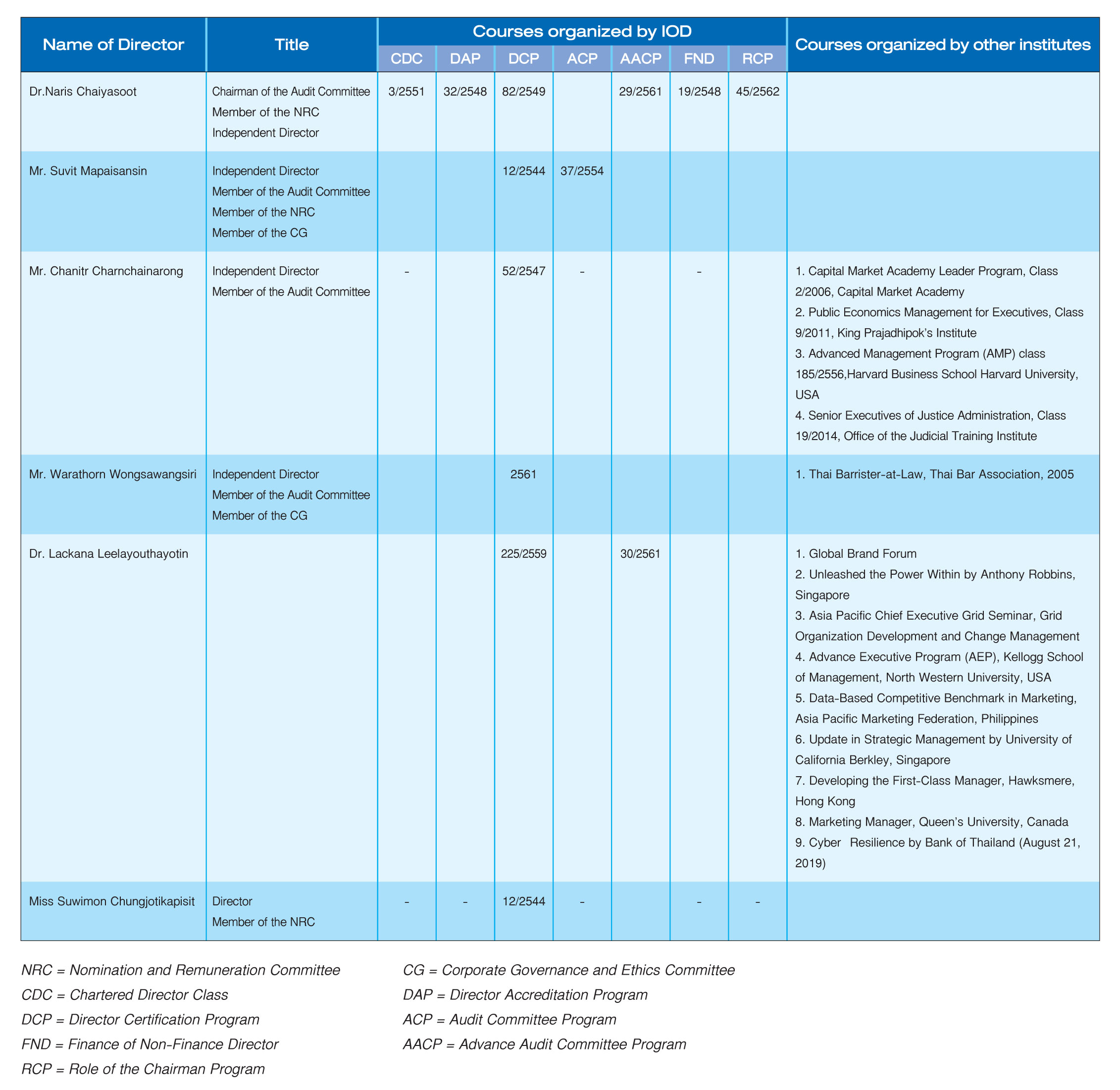 Board of Directors' Meetings

The Board of Directors announced the Board meeting’s schedule in advance for 1 entire year, to the directors and the relevant parties, requiring that a regular meeting be arranged at least once every quarter (4 times a year), with a special session meeting allowed to be convened as deemed necessary. Agenda items are also pre-determined and are clearly divided into categories such as issues for information, issues for approval and issues for consideration.

In each meeting, the Chairman allows each director to express his/her opinions freely and allocates time appropriately and efficiently. In case of a director having a stake in a matter being considered, the director shall inform the meeting of such stake and shall not participate in discussing the matter and not exercise the voting right on the matter. At least 2/3 of the total number of directors shall be presented to form a quorum at the time of the Board passing a resolution.

The Board of Directors has a policy to encourage each board member to attend the board meeting consistently, with an average participation of at least 80% of total number of board meetings held in each year. The total number of meetings held and attendance by each member of the Board of Directors and board committees are disclosed in the Company’s annual registration statement (Form 56-1) and annual report.

Besides, the Board of Directors has a policy to encourage non-executive directors, independent directors and members of the Audit Committee to hold meetings among themselves as deemed fit in order to discuss about any crucial management issues without the presence of the management. In 2019, the Audit Committee members, held 1 meeting with the external auditor without the presence of the management on February 28 th, 2019

Merger and Segregation of Duties

The Board of Directors requires that duties be clearly segregated for the purpose of power distribution in decision making and directing, with balance and review in management. This has been continuously improved for suitability and coverage of the Company’s activities, in line with changes in the notification or requirements of regulatory agencies, with management power being put under the Corporate Authorization Index for information and action by parties concerned.

Independence of Board of Directors and Management

Directorship in Other Listed Companies

The Board of Directors has established a policy on directorship in other listed companies as follows:

Design and development by GMM GRAMMY